Your are in: Home / Exhibitions

We take an innovative and unique approach to exhibition programming, bringing together what were once separate museum and gallery services.

In addition we have permanent displays around the building.

This gallery permanently houses both:

Oldham Stories exhibition, featuring selected objects from our extensive collections to tell and show the stories of Oldham and its local communities. From birds and shells to a recreation of an Edwardian chemist’s shop, every object has a fascinating tale to tell. The display features local figures such as suffragette Annie Kenny, the pioneering natural history collector James Nield and the popular artist Helen Bradley.

The Community Gallery, which has a wide range of exhibitions by groups and individuals from the Borough of Oldham.

While the Gallery Oldham is temporarily closed you can enjoy the full online version of this exhibition by clicking here.

Syd Shelton’s photographs capture one of the most intriguing periods in British post-war history. Between 1976 and 1981, the movement Rock Against Racism (RAR) confronted racist ideology in the streets, parks and town halls of Britain. RAR was formed by a collective of musicians and political activists to fight racism and fascism through music.

Under the slogan ‘Love Music, Hate Racism’, it showcased reggae and punk bands on the same stage, attracting large multicultural audiences. Shelton photographed performers such as The Clash, Elvis Costello, The Au Pairs, The Specials and protests such as the Anti National Front Demonstration in Lewisham in 1977.

This exhibition revisits the energy of RAR and the creative alliances that were formed. Shelton’s photographs remind us that Rock Against Racism was a particular treatise on belonging in Britain. 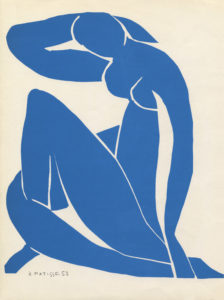 Matisse: Drawing with Scissors, presents an overview of the spectacular last works of the French artist Henri Matisse. The paper cut-outs that Matisse made during the last years of his life are among his most vibrant and joyous creations.

Confined to his wheelchair or bed, and no longer able to paint, sculpt or make prints, he ‘drew with scissors’, cutting directly into brilliantly coloured paper   pre-painted by assistants under his supervision.

The images in this exhibition are lithographic reproductions of Matisse’s late cut-outs, produced for the French art review Verve. In the final year of his life Matisse oversaw the preparation of the lithographs for a special issue of Verve dedicated to the artist in 1958, four years after his death. These fine lithographs are exceptionally faithful small-scale reproductions, intended to introduce the original cut-outs to the wider public.

This exhibition explores water from the start of its journey in the clouds through to its use by people and animals. It features a selection of objects chosen from across the Gallery’s collection.

Water is an essential element for all life and makes up an important part of our local wildlife habitats. Come
and see beautiful paintings portraying rivers, lakes and canals displayed alongside ancient fossil fish and an
array of present-day aquatic creatures. The special attraction is a fossil skeleton of an Ichthyosaur a dolphin-like creature from Jurassic times.

Oldham became the most important cotton spinning town in the world because of the damp climate which is
necessary to spin the best cotton yarn. But water has a special attraction to us for leisure activities, swimming, boating and fishing to name just a few. Come along and take a dip in this fascinating subject.